Why I Give - Donor Testimonials

Hear from some of our generous supporters about why they have donated to Regina Health Center to help fill a need.

For his entire life, Tom Seeman has had a connection to the Sisters of Charity of St. Augustine. His aunt, Sister Margaret Mary Pero, CSA, was a member of the congregation. He remembers seeing her at family events when he was younger. When she moved to Columbia, South Carolina, to work at Providence Hospital, the Seeman family spent one summer vacation vising her, even staying in a hospitality cottage provided by the sisters.

“The sisters brought our meals to us and acted as guides as the family toured the attractions surrounding Columbia. Their hospitality was fantastic, and it was one of the best summer vacations of my youth,” said Tom.

Sr. Margaret Mary moved back to Northeast Ohio after her time in Columbia to be the director of practical nursing at Timken Mercy Hospital in Canton (now Mercy Medical Center). Tom and his family continued to visit Sr. Margaret Mary in Canton. Years later, she moved to the Mt. Augustine Motherhouse, which also houses Regina Health Center (RHC). After Sr. Margaret Mary passed away, Tom and his wife Gwen made a donation to RHC. Gwen was invited to tour RHC and was very impressed with what she saw.

They decided they wanted to do more to help. Once they started taking minimum required distributions from an IRA, they began to donate directly to Regina Health Center through a qualified charitable distribution, which can lower adjusted gross income.

“We wanted to give to a worthy ministry while also lowering our income taxes,” said Tom. “We fully support Regina Health Center in providing housing and health care for the retired clergy and religious sisters of the diocese. These individuals labored tirelessly to do God's work with faith that God would take care of them as they aged. Everything about Regina Health Center is first class.”

Tom and Gwen decided to take their giving to an even higher level through a charitable gift annuity—while also receiving a financial return and becoming members of the Regina Society. Membership in the Regina Society is open to individuals and couples who make a planned gift to Regina Health Center, bequest in their will or a gift of more than $10,000 (over their lifetime or one time gift).

“Gwen and I have waited to purchase a charitable gift annuity until we felt the rate of return was much better than we could get elsewhere with the same level of security. In our case, it makes great financial sense. The fact that it is a donation to one of our favorite charities is just a bonus,” he said. 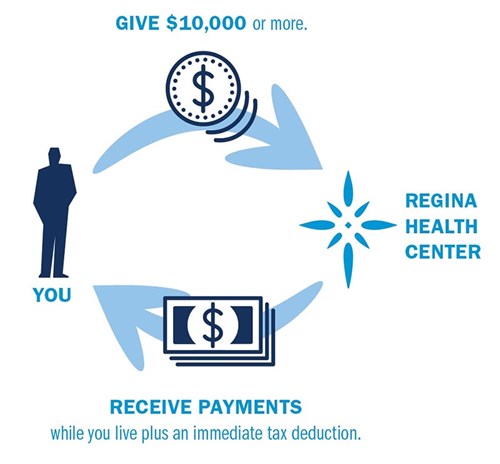 Lock in a Competitive Rate *Based on Your Age

Call Colleen Corrigan Day at 330.659.5132 for more information and to order a personalized, no-obligation illustration showing the income and tax benefits you can gain. All requests are kept confidential and we honor all requests for anonymity.

*Rates shown may change. The minimum age is 65 and minimum gift amount is $10,000 cash or securities. No commissions or fees are paid.

Why I Give Archives

Read more stories from our generous supporters about why they give by clicking on the links below.

Donor Makes a Difference with a Bequest

Rita Burdick Makes a Difference with a Bequest

When Rita Burdick’s mother had a major stroke at the age of 97 in 1996, she didn’t know who to turn to for care. She and her mother had lived together for all of Rita’s life, so she was extremely hesitant to leave her mother’s care to someone else. Rita’s priest helped her find Regina Health Center (RHC), where her mother lived until her death at the age of 101. Rita would visit her mother at RHC seven days a week for the four years she was there. “I became very attached to RHC after being there so much and seeing the wonderful care they gave my mother. I felt they did everything they could to make her life as pleasant as possible,” said Rita. “RHC has been very dear to me.”

Rita is so fond of the organization, she recently made a bequest to RHC by having her attorney add a few sentences to her will. She said the process was simple and it was an easy decision. “As the government pulls back funds and the cost of goods keeps increasing, I wanted to help RHC sustain its current level of quality care. Donations are essential to doing so,” added Rita.

In addition to the bequest, Rita remains very involved with RHC. She has been the president of the Friends of Regina Health Center for the past six years and serves as a Eucharistic minister for some Sunday Masses at RHC. She also spends part of Christmas day visiting with residents and works to raise money for resident parties and other quality-of-life activities.

“If you’re asking yourself whether there is a good place for you or a parent, there is. By making donations now and through a bequest, we keep RHC a great place. There are so many places in the world that need help. RHC is unique in caring for those who have done so much for so many, including the priests, nuns and laity who call RHC their home,” added Rita.

With her bequest, RHC welcomed Rita into the Regina Society, which recognizes legacy donors who will provide support for RHC beyond their lifetime.

For more than 60 years, Dr. Bob Eiben has been a friend of the Sisters of Charity of St. Augustine.

Dr. Eiben began his career as a pediatrician, specializing in infectious diseases. He ran the contagious disease ward at the former Cleveland City Hospital (now MetroHealth Medical Center). He also served as the pediatrician for Parmadale Children’s Village in the 1950s and 1960s, which was administered and staffed by the Sisters of Charity of St. Augustine. Working at Parmadale was important to Dr. Eiben. “I was blessed to have the opportunity of caring for children alongside the kind and caring Sisters,” he said.

In the mid 1950s, a social worker, Patricia Barrett, later to become Sr. Mary Patricia Barrett, CSA, spoke with Dr. Eiben about a child under her care. He became ill with polio and was admitted to Cleveland City Hospital. She sought Dr. Eiben’s expertise because she wanted to visit the child in the hospital, but was worried about bringing the contagious disease back with her to Parmadale. She has always remembered Dr. Eiben’s firm, but kind, response to her. “I take care of these children in the hospital and I go home every night to be with my own children. You do what you think is right,” he said. She took his advice and visited the sick child, which brought him comfort.

When Dr. Eiben and his wife Annie wanted to donate to Regina Health Center (RHC), they chose to establish a charitable gift annuity. With a charitable gift annuity, their donation helps RHC continue its mission while providing the couple with an additional source of retirement income through annuity payments. When asked why they choose to donate to RHC, Dr. Eiben said, “I am indebted to these Sisters. It is the least I could do for everything they did for me. This is my way of giving back.”

Before Margaret Anne Brosnan passed away in late 2010, she had the foresight and philanthropic spirit to meet with her attorney and other advisors to establish her estate plan. Her plan included the distribution of gifts to various charities upon her death that would benefit beyond her lifetime.

Anne had been a dear friend to many at Regina Health Center (RHC), especially Sr. Catherine Browning. She designated RHC as one of the beneficiaries of her estate. Specifically, she requested that RHC establish an endowment called the Brosnan-Barrett Endowment to be used to further the unique Christian charitable works of the care of the aged, sick and infirm brothers, sisters, priests and others who receive care at RHC.

“Anne’s final request perfectly fit the primary mission of RHC. We were so fortunate to be included in her will and were grateful to accept her gift, which will make a lasting impact on RHC and the care we provide residents,” said RHC Development Director Maureen O’Neill-Laszlo.

The trustee of Anne’s estate, Patricia Mascolo, said that Anne knew what she wanted to support and took great strides to ensure that her final wishes were carried out with care. “She included a provision in her estate documents that the established endowment would be a reminder to others to pray for her father, Patrick J. Brosnan, mother, Mary Barrett Brosnan and Margaret Anne Barrett Brosnan,” said Patricia.